Posted at 06:54h in arrow books, Ashwin Sanghi, Book Review, Fiction, James Patterson, Private India, thriller by Iswarya
PR Sample
Private India is a thrilling suspense novel from two masters of the art: Ashwin Sanghi and James Patterson.
Summary of the Book
When a series of seemingly unconnected murders rock the city of Mumbai with the macabre rituals and artifacts found around the corpses, Private India, a leading investigation agency takes the case. Santosh Wagh, the head of the organization, has only one mission. He needs to stop the killers before they strike again. However, in a city of over 13 million people, he finds that the clock is ticking too fast. He finds himself pitted against underworld dons and a Godman who isn’t what he seems. However, the worst is yet to come and Private India itself may be threatened with a revelation that could destroy the entire organization.

About the Authors
Ashwin Sanghi is an Indian writer and entrepreneur. He has also written: Chanakya’s Chant and The Krishna Key. He is also known by his pseudonym: Shawn Haigins. A graduate of the Yale School of Management and St. Xavier’s College, he has since been awarded several acclaims for his work. His second book has been optioned for a movie by UTV and is expected to begin production soon. He currently lives in Mumbai with his loving family.

James Patterson is a bestselling American writer. He is best known for Along Came a Spider, Jack & Jill, When the Wind Blows and Step on a Crack among over 100 others. 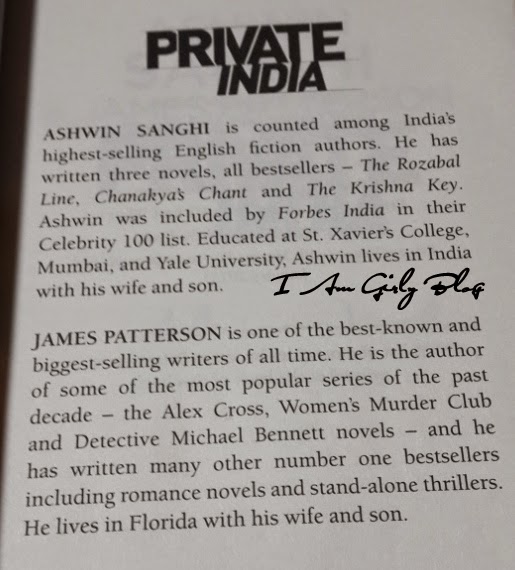 My Take on the Book:

The cover image of the book is clear and lets you know from the first glance that it is a thriller and is based on Mumbai. I love the embossing effect on the cover image which makes it attractive. The publisher is arrow books.

The book is about the story of the detective agency “Private India” – the Indian branch of Private, a renowned International level investigation company run by former CIA agent Jack Morgan. Santosh Wagh is the head of Private India. Santosh’s team consists of his assistant Nisha Gandhe, a first class investigator in mid-forties, Hari, the technology geek and Mubeen, the forensics expert and medical examiner. 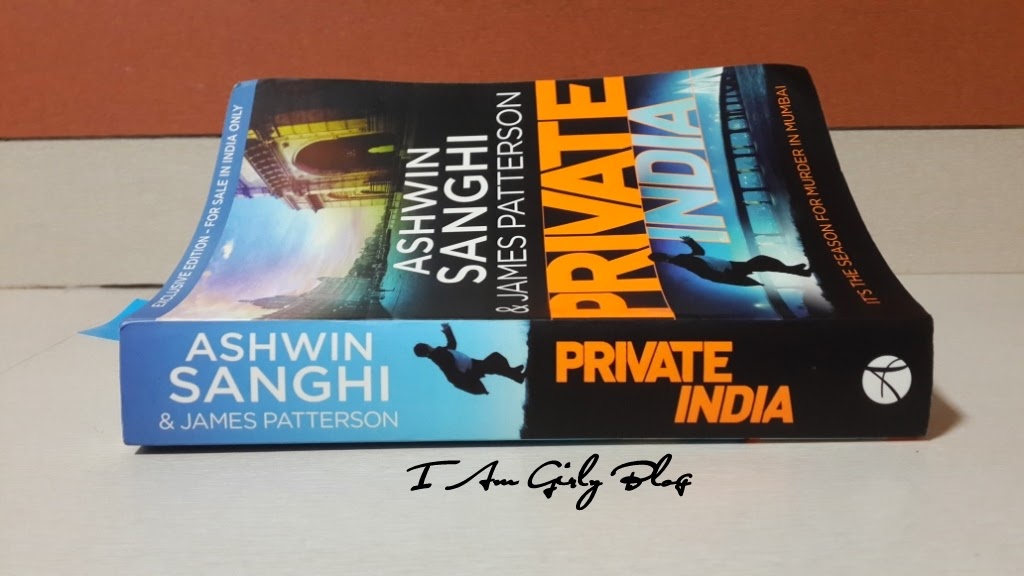 Private India, the world’s finest PI agency is headquartered at Mumbai. Santosh Wagh in charge of the team at one side and on the other end he is struggling with a bottle of Johnnie Walker Black Label blaming himself for the accident in which his wife and child were killed and drowning his despair in drink. Santosh had been an agent with RAW, India’s Intelligence Agency during the 2006 Mumbai train bombs which brought him in contact with Jack.

The story begins when a lady is found strangled in a hotel room, the hotel management of Marine Bay Plaza calls Santosh to the scene, and he starts investigating. The first one to be murdered was a Thai doctor. She has a yellow scarf around her neck and her hands are tied with strings. There is a flower on one hand, and a fork on the other. There is also a small, Viking toy helmet tied to one of her toes. A cut hair strand was also found with these. 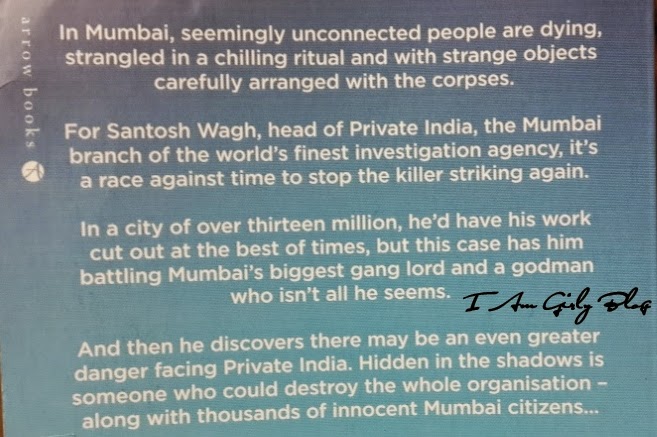 The person behind the murder is very clever and leaves no traces or suspicions behind. The only clues are the props/toys. The case is handed over to Private by the Mumbai Police and Rupesh Desai, the assistant commissioner of police in Mumbai Crime Branch has a past uneasy friendship with Santosh.
A series of Murder is reported immediately after the first one. All of them were women murdered in a chilling ritual, with strange objects placed carefully at their death scenes. Eight such killings take place in Mumbai.
Every victim was strangulated in a similar way with a yellow scarf, with trinkets placed around them. The murder plan was the same but only the personalities and the props vary.
Santosh takes up the challenge of finding what connects these women. Eventually the Navarathri festival and the nine incarnations of Goddess Durga becomes an intrinsic part of the plot.
As the Private team race to find the killer, a greater danger faces Private India – a danger that could threaten the lives of thousands of innocent Mumbai citizens and the organisation of Private India itself.
The murders increase in number, with a number of suspects being in a race to be the #1 suspect – The Attorney General – Nalin D Souza, Munna, Nimboo Baba, Hari and many more. The typical Indian portraits of policemen, goons, politicians, celebrities and the spiritual gurus make this book a worth read.
The plot jumps from one point to other like a usual thriller and is fast pacing with the serial murder case. The Author has left clues at particular places in the book that a particular person may be the killer and a particular women is going to be murdered next which doesn’t give that adrenaline rush. 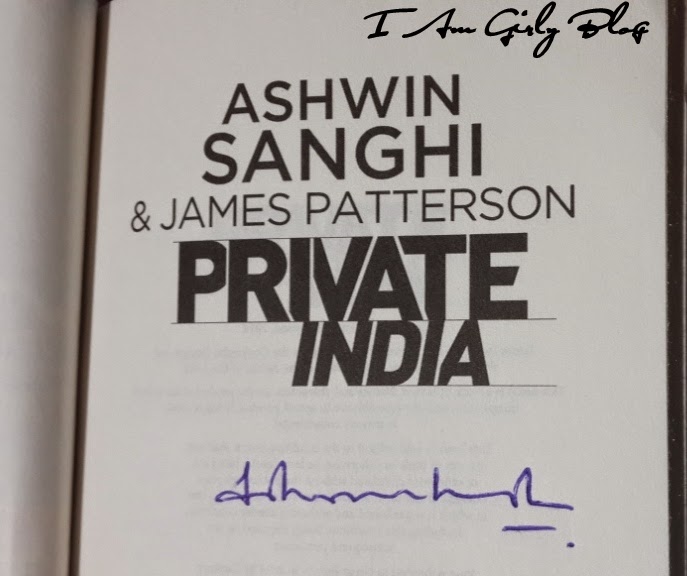 The novel all in all is a page-turner, and makes you glued to the book. When I received a book with 448 pages I wasn’t sure of reading completely. I finished the book in just 2 days with my hectic schedule on one side and I was amazed. I learnt new things from this book – for instance – the concept of thugs. The book is well written except for the repetitive flashbacks, cliches and stereo types, bad words, sexual representations and vulgarity.

These could have been avoided as it is not required for the plot and results in poor reading. The book is dominated by the James style of writing and there are one liners from Ashwin. The book is perfect for a journey. Some instances from the story are unbelievable with many sub plots like terrorism but I enjoyed reading this book. The book is light and didn’t bore me.  Overall, an interesting read and a novel that’s taut from two best-selling authors.
You can but this book here 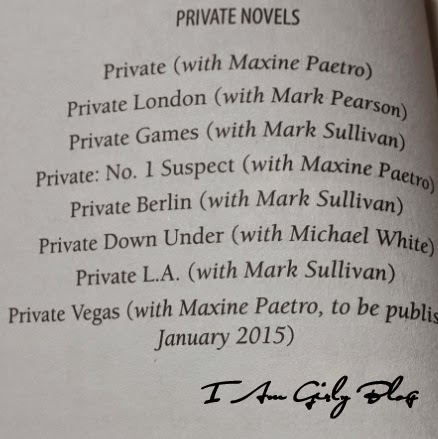 Thank you Blogadda for the autographed copy of Private India !

This review is a part of the biggest Book Review Program for Indian Bloggers. Participate now to get free books!

Hey! Glad you stopped by!

Unauthorized use and/or duplication of this site or any portion thereof in any manner without express and written permission from the author and/or owner is strictly prohibited. Excerpts and links may be used, provided that full and clear credit is given with appropriate and specific direction to the original content.